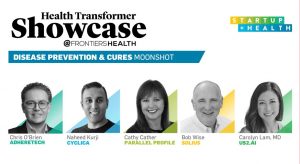 First up was Chris O’Brien, CEO of AdhereTech, who introduced the Aidia System, a proven, integrated technology-based adherence solution that empowers patients and healthcare teams to achieve optimal medication success. Using real-time data collected passively with smart devices, the Aidia System enables personalized patient support and timely, proactive care so they are no longer on their own when it comes to the challenges of staying on track with medications. The Aidia System is free to patients and removes both the psychological and practical barriers that can cause them to veer off track with their prescriptions. Central to the system is the premise that tech-savviness is not required to benefit from it. Chris shared two cases and a comment by the Data Analytics Lead, which was, “It’s rare to see such significant results so early in a program!”

Next was Naheedd Kurji, CEO & Co-founder of Cyclica, a neo-biotech that’s scaling the largest and most therapeutically diverse pipeline in the industry. Rooted in Canada, Cyclica is rated as a top 100 AI company globally and is a founding member of the AAIH (Alliance for Artificial Intelligence in Healthcare). Cyclica’s vision is to drive drug discovery by empowering pharma scientists via an integrated, cloud-based, AI-augmented platform that enhances how they design, screen, and personalize medicines with novel, internally built, IP-protected tech.  Artificial Intelligence and machine learning companies rely on pre-existing high- quality data, but are limited in the space they cover, and don’t factor in the detailed physical or chemical structure of targets. Consequently, AI is only one piece of a much bigger puzzle. Most virtual screening companies are target-centric, docking many molecules into a single protein without considering a drug’s polypharmacology.

The three races of drug discovery and development are:

Cyclica’s flagship technology is the only drug-centric, structure-based (computationally biophysical) platform that is supported by AI and machine learning techniques to provide insights into a drug’s polypharmacology (including off-target interactions) for the pharmaceutical, nutraceutical, and cosmeceutical industries.

Parallel Profile CEO & Co-founder Cathy Cather described how her company’s digital platform matches drugs to a user’s DNA information, which is immediately available and relevant to medication decisions. Instant access to all results and the ability to add new medications at any time on a phone or tablet helps individuals and their physicians instantly match their DNA to the best options.  Parallel Profile utilizes a national telemedicine network of specialized MDs trained in PGx testing and analysis, top CLIA certified labs, and respected databases that include Wolters Kluwer, as well as CPIC and a division of IBM. Immediately relevant results showed that 43% of those in the Beta Group were currently taking at least one drug outside of their normal response zone, and a safer and/or more effective alternative was identified.  Parallel Profile has been named one of the Top 10 Most Innovative Healthcare Companies of 2020 by the Employer Health Innovator Roundtable, a coalition of the largest and most progressive American employers that collectively represent more than eight million lives. Parallel Profile’s benefits for employers include:

Next came Bob Wise, CEO of SOLIUS, who shared the startup’s mission to bring the world a safe, effective, and enjoyable way for everyone everywhere to use light to unlock the healing powers of their own bodies.  Sunlight has the power to fundamentally impact human health and happiness. Out of all the vast energy that the sun emits, there is a small spectrum of ultraviolet B (UVB) light that is responsible for some incredible physiological benefits, including the critical production of vitamin D. Approximately 77% of the global population has low vitamin D, and deficient levels are connected with over 53 different disease states. Vitamin D is actually a hormone, produced naturally after UVB light is absorbed by the skin. Human bodies were simply not designed to ingest vitamin D as a supplement. SOLIUS emits a narrow spectrum of light that stimulates more vitamin D than the sun. The hormones and peptides produced by its light spectrum play a role in preventing sickness, fighting disease, and supporting mental health. The startup is currently focused on developing a SOLIUS home device that will be powered by highly efficient ultraviolet LEDs have the same efficacy as the commercial product, at a fraction of the size and cost.

Last but not least was Dr. Carolyn Lam, Co-founder of Us2.ai. The company is automating the fight against heart disease by using AI software to simplify and standardize heart ultrasounds, the most commonly used tool for detecting cardiovascular risk. Nearly one in three people will die from heart disease, and the key to winning this fight is early detection and disease prediction. But sonographer shortages, expensive ultrasound software and hardware, and the difficulty of interpreting echos all limit access to life-saving tools and diagnoses. Us2.ai is building a future where everyone, from the most advanced tech-driven to the most resource-constrained, can have equal access to high-quality, consistent, and inexpensive echo analysis for a better heart and a better life.  Carolyn concluded her presentation by telling the story of how co-founder James Hare had disparate echocardiogram results from two different doctors and showing a video of all the information the comprehensive AI-generated report contains, making Us2.ai easy, efficient, and scalable.

Connecting the industry through medical devices and telemedicine. GIMA has arrived as a FH22 partner

Making digital medicine a reality in neuroscience, Biogen to collaborate at Frontiers Health 2022

Publishers, consultants and creatives bringing healthcare together. pharmaphorum is back at FH22

Connecting patients and clinicians wherever they are. Teladoc Health brings their transformative technology to FH22!

[vc_row css=".vc_custom_1561037856751{padding-top: 20px !important;padding-bottom: 20px !important;}"][vc_column][vc_column_text el_class="post-text"]Over the years, Frontiers Health has been hosting global conferences and other initiatives to ...

Supporting innovation and expanding global access to care. StartUp Health is back to Frontiers Health!

United towards global health innovation. Bayer G4A joins us once again at FH22!

Introducing the guiding themes for the Frontiers Health 2022 global conference

Transformative places collide as Frontiers Health returns to Milan at a new location, Palazzo del Ghiaccio, for its 2022 Edition

IF YOU WOULD LIKE TO TAKE PART IN THE EVENT,
OR BE THE FIRST TO FIND OUT ABOUT OUR 2022 EDITION