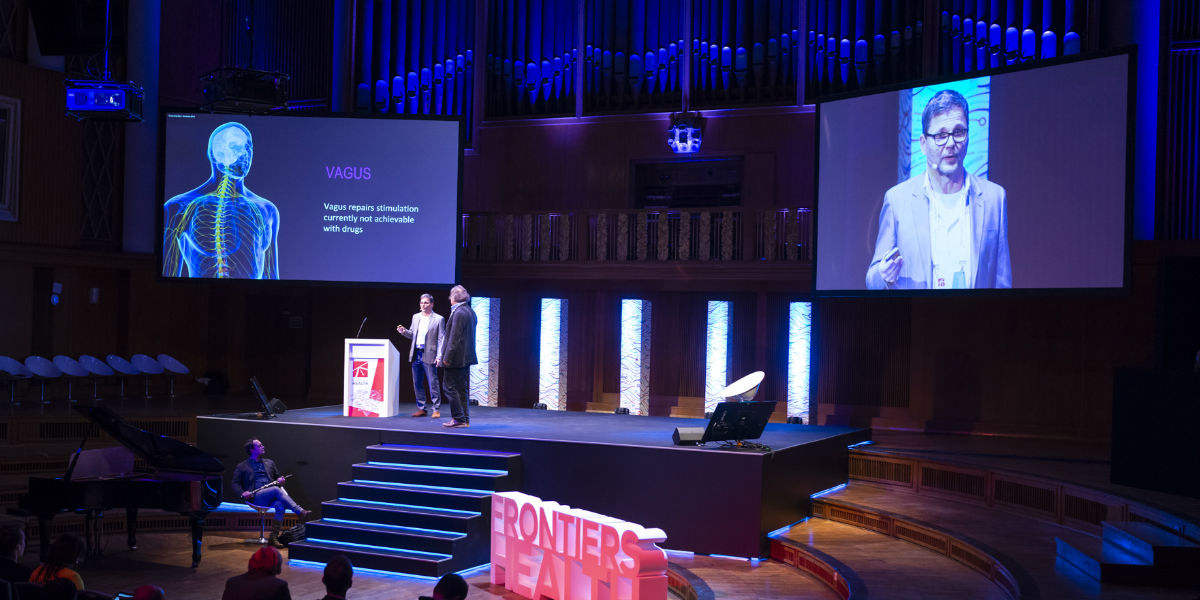 Check out the interview with Walter Werzowa, Founder of HealthTunes

Walter Werzowa, founder of HealthTunes, is not your typical startup entrepreneur. A 57-year-old accomplished musician stands out in any startup crowd.

Looking back, the digital health space was a natural fit for Werzowa, who was born in Vienna to a family of doctors.

“I was the black sheep: making music, being in a band, having successes, writing alternative opera, long hair and all that. I was a little bit of an outlaw and everybody else was smart and amazing at healing, health and saving lives. When people came to my concerts they might have used medicine, but not in too healthy a way.”

Before getting into digital health Werzowa received a degree in Contemporary Electronic Music and studied Classical Guitar. His most famous works include the Intel audio signature, and he has worked with the likes of Steven Spielberg and Wim Wenders.

HealthTunes is a music healing platform. As with so many other startup founders, in the beginning there was a big and very personal challenge. Werzowa’s youngest son, Lucca, was diagnosed with a rare bone syndrome and recovery was estimated to be a painful 3-6 years.

“Some doctors told us that he should stay in bed for a year or two in the hospital. Some said surgery, some said braces. We got a lot of different opinions. Pretty much anything that was suggested felt traumatic, especially for a very athletic young boy,” Werzowa remembered the reactions.

The family took the non-classical approach: subscribing to an osteopath, acupuncture, a very strict diet and sound healing. And it worked.

“A year later we went to two of the hospitals who had diagnosed Lucca. The doctors were amazed and thought that somebody had switched the documents. They asked how we had done it and what happened,” he said. “That was the emotional start of HealthTunes.”

“I started a health website as a musician who brings music to people to enable faster, better healing. Then I talked to pundits and doctors and when they heard of healing tunes they would roll their eyes,” Werzowa said. To counter that, he had to look to the science first: he read academic research, including evidence-based research. He also built a music library of 26,000 tracks, which BMG acquired in 2014, enabling him to create an innovative streaming platform.

“I feel really blessed that these two worlds – a medical world and a music world – came together,” Werzowa said.

HealthTunes.org launched in June 2016 at the Health 2.0 conference in San Francisco “We got an incredible response. It was beautiful to see that there’s so much request for it and the timing is right.”

The impact of music is sometimes stunning. “I have a video where one patient, after three weeks in a coma, wakes up to one song and slowly starts singing along – waking up and coming back to life. Feeling better is just super-rewarding. That’s why I want to keep it free of charge. It is donation-based and we ask companies like Google and Apple to donate so that we can survive.”

Going forward, Werzowa sees HealthTunes also acting as a social platform for patients and their families to share experiences. “There’s barely any information out there where parents can share information – seeing it and getting it across,” he said. “I would love to see more networks developing. Maybe they could choose HealthTunes as a place to tell their stories and help each other by just being there. Basically, being in the doctor’s waiting room and sharing their experiences.”

Roberto Ascione, CEO of Healthware – is supporting HealthTunes’ mission by creating an innovative iOS native app. We are set to roll out HealthTunes with Insurer’s in Hawaii, starting on 1 January 2019. Our goal is to add 400,000 customers during the first half of the year.